Happy Black History Month 2022 everyone! For those who are not sure what this fantastic month is, it’s a chance to celebrate, learn and acknowledge the contribution’s black people have made throughout history to help shape the diverse country we have within the UK, and worldwide.

This year’s theme for Black History Month is Time For Change, so what better way to change our knowledge and get people thinking than with some brilliant TV shows focused on black history and black culture?

Carry on reading to find out what to watch and where to watch it within our guide of the top 8 TV shows for Black History Month. 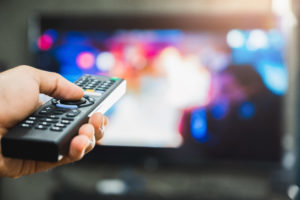 Dear White People is a vital TV show to watch this Black History Month, or any other time.

The satirical show is a Netflix original which focuses on black students at a predominantly white Ivy League university in the US, where they deal with social injustice, cultural bias and other discriminations which still take place in today.

When the show first landed on Netflix on 2017, there was some backlash due to the titles name and it was accused of promoting an ‘anti-white’ rhetoric, however, it highlights brilliantly the current state of race relations in Western society.

The show is an adaptation of Justin Simien’s critically acclaimed film of the same name, with four seasons for you to watch.

If you’re looking for a show which is educational and informative but also humorous, then this one is perfect to tune into.

The Get Down is an American coming-of-age drama TV series which showcases the rise of Hip-Hop music within the late 1970s in New York City.

Despite being fictional, the series by Baz Luhrmann and Stephen Adly Guirgis documents the emergence of a new music genre with some real events tying into it.

Set in the late 1970s when NYC and the Bronx was at the brink of bankruptcy and disco music was becoming less popular, the rise of hip-hop is told through the lives of a group of young people.

The great music throughout the episodes make’s it such as easy show to binge-watch and love. There are some amazing black actors within the show from Jaden Smith to Justice Smith to Shameik Moore to many more – give it a watch!

The Underground Railroad is a historical drama that will certainly take you on an emotional journey upon watching.

The award-winning Amazon Prime Video series by Barry Jenkins is based on the 2016 novel of the same name by Colson Whitehead.

The show tells a fictional story of a young woman named Cora and a group of people attempting to escape from slavery in the deep south United States in the 1800s.

There have been many drama TV shows and films which portray the experience of slavery, but throughout the 10-episodes of The Underground Railroad we are given a powerful outlook on the underground railroad.

Which although is re-imagined in the series, was very much a real thing which helped hundreds of thousands of slave’s escape.

If you want to learn more about the historical traumas of slavery and about the underground railroad, you need to give this a watch.

Atlanta is an American comedy-drama TV show created by Donald Glover which debuted in 2016.

Since its release, the show has reached critical acclaim with it now reaching its fourth season. It’s particularly popular for showrunner Donald Glover’s performance as Earn Marks, a young manager trying to get his cousins rap career started in Atlanta.

The Emmy-winning series focuses on the aspiring life of Black Americans in the US, with struggles and racism portrayed throughout which is still prevalent in modern society.

All of the music featured within the show is created by black artists and sticks to Glover’s aims of making the show about feeling truly black.

The series really delves modern racism in a way which other shows haven’t really done with amazing cinematography – we urge you to watch this one!

Insecure is a comedy-drama series released in 2016, which was created by and stars Issa Rae.

It follows the life and friendship of two women Issa and Molly in South Los Angeles as they try to navigate through adult life and share uncomfortable experiences. Friendship and the experiences of modern-day black women are at the forefront of the plot.

Across the series, it looks at the challenges faced from being a woman of colour who defies stereotypes of what society expects them to be.

Not only does ‘Insecure’ give an authentic portrayal of black women in modern America, but it also provides a realistic view on life and friendship, and shows that adult life is complex, and that’s okay.

It’s about time we shed some light on some British excellence. Top Boy is a crime drama series by Ronan Bennett which is considered one of the best British shows on Netflix.

This powerful series features actors such as Ashley Walters, Kano, Little Simz, and Micheal Ward through its exploration of gang crime within East London.

Set within the fictional Summerhouse estate in the London Borough of Hackney, the show focuses on two drug dealers Dushane and Sully and the tensions that they and the everyday people face within the crime-riddled area.

Although the show is fictional, it explores the racist structures embedded in British society and shows how gang crime often shapes the lives of those in underprivileged areas due to the challenging experiences they go through, and when they are failed by institutions.

We strongly recommend you give Top Boy a watch!

The award-winning comedy series follows an African American family living in a white, upper-middle-class neighbourhood as Dre Johnson, the father of the family is determined to establish a sense of cultural identity for his family.

It’s both entertaining and funny whilst also being educational in the sense that it brings to light social issues in American society. There are 8 seasons to watch, so we’re sure you’ll be kept busy by streaming this one!

We Are Black And British

Lastly within our guide of shows to stream during Black History Month 2022 is ‘We Are Black And British’.

This mini-series follows six black Britons with different viewpoints and lifestyles as they come together to discuss the topics of race and racism in the UK.

It explores race and identity in a completely new perspective by bringing together Black British people from opposite walks of life.

Each person has their own personal story to share and a wide variety of social topics to focus on, but one thing remains the same throughout, the urgency to change the way Britain treats its Black citizens.

Despite the UK being a widely diverse country, we’re still a long way from being anti-racist or anti-discriminatory as a society.

With the theme for Black History Month 2022 being time for change, it’s certainly imperative to give this show a watch to be educated on the racial inequality issues that are still occurring in Modern Britain, and what can be done about them.

How To Watch: BBC iPlayer

There are tons of other TV shows which you should watch for Black History Month 2022, so this is not an exhaustive list of recommendations, just a few of our most note-worthy watches.

We do hope you stream these fantastic shows that depict the experiences and cultures of the Black community, this month and thereafter!

Read next: Student Safety Tips For Living In A Student House.

Have a look at our student accommodation properties and find out about where you could set up home when you head off to university.

Glow Up 2023: All the TikTok Tips You Need to Start The Year Right

Cosy Things To Do To Do In Leeds This Winter