New Year’s Eve is set to go off in Nottingham this year with a variety of celebrations taking place across the city. But the question is, where will you be heading?

If you’ve somehow not sorted out your NYE plans yet then hurry up and take a read of our guide to get them boxed off – the 31st December is only one week away after all.

Whether it’s grooving away on the dancefloor with your flatmates, chilling with your nearest and dearest or something different you’re after, we’re certain you’ll find somewhere to wave goodbye to 2022 with our top 10 events… 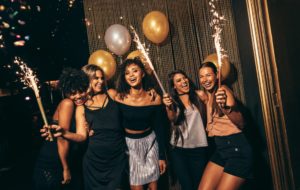 Start the year off right with this New Year’s Eve Party taking place at Revolution Hockley from 8pm until 2am.

Wondering what to expect at Revs? There’ll be VIP booths, an array of drinks to cheer to the New Year ahead, DJs playing only the best feel good tunes, as well as a confetti drop when the clock strikes 12.

If you’re on the hunt for somewhere to spend the night with your closest pals then why not grab a ticket?

They vary depending on whether you’re after a drinks package or a standard entry wristband.

For a student-friendly option, the premium drinks wristband costs £18 which includes your entry and three drinks included – not bad, aye!

Make it an unforgettable New Year’s Eve down in the tunnels at Groovebox.

Resident DJs and special guests will be mixing the very best classics at Tunnel Club from 8pm all the way up until 4am so the party doesn’t have to stop once the new year begins – what we like to see!

The event will be spread across two rooms with LED walls, visuals and sound making it the place to be for the celebrations.

It can’t get much better than this with tickets currently priced at £9, get yours sorted quick time to ensure your New Year’s Eve celebration is all sorted!

House Of Coco Tang has everything you need for your New Year’s Eve celebrations in Nottingham this year.

Put on your best fit and head out with your mates to the basement of this iconic Vietnamese themed cocktail bar with DJs blasting the best electric house mixes all night long.

The interiors of this place are literally unrivalled with a huge disco ball and neon lit signs making the vibes just that much better.

These guys push the limits of creative cocktails so rest assured you’ll have some tasty tipples to raise once the countdown begins at Coco Tang X NYE’ 22.

You might as well make the best memories to send 2022 out in style, so buy a ticket whilst there’s still some left and let the drinks flow!

Escobar Nottingham are hosting their own New Year’s Fiesta and we reckon it’s gonna go off!

Boasting some of the best entertainment in the city you can expect a 360 video booth, a live DJ playing hip-hop, R&B and dancehall as well as a cannon confetti, balloon drop and tons of Latin American inspired cocktails to choose between.

Depending on what time you arrive you may even be able to get some complimentary drinks too!

Tickets are only £11 at the minute for this New Year’s Eve event so you don’t need to splash the cash to get down on the dancefloor.

If you’re after a festival-like experience for this New Year’s Eve in Notts then you’ll want to head to Rock City – otherwise known as the UK’s best live venue and nightclub!

Organised by Rebel Rebel, this event is ramping up the game for party-goers in the city with three huge rooms with DJs playing the tunes all night long taking you through to the New Year.

What music is it you might be thinking? Well, they’ll be playing the greatest songs of all time so you can get your karaoke on.

You can sing along to classics, dance your socks off and make the most of huge stage productions, confetti cannons, co2 blasts, competition giveaways, and loads of drinks deals.

Be quick and get your ticket sorted today for The New Year’s Eve Countdown, there’s no better way to celebrate and you get a glass of bubbly upon entry!

Join the ultimate New Year’s Eve party taking place at PRZYM and be transported into a neon future.

Kicking things off from 9pm, there’s set to be a huge soundtrack from a mix of DJs, huge production, UV lights and decor, giant inflatables and glowsticks.

You and your fellow party-goers can boogie on the dance floor and countdown to the New Year, is there anything better than cheering when the clock hits 12?!

There’s individual tickets on sale for standard entry or you can get a booth package for you and your mates.

What’re you waiting for, it’s time to celebrate so get your ticket now for this New Years Eve bash!

No plans for the 31st yet? Not to worry, head on down to the home of electronic dance music in Notts, Stealth.

Some huge DJs like Tsuki, Ben Snow and Devilman will be providing high-energy drum and bass beats alongside more artists yet to be announced on the line up – it’s gonna be a madness!

In room 2 they’ll be playing the best Hip-Hop, Rap, R&B and Afrobeats hits so you’ll have the best of both worlds to dance along until the early hours with your pals.

Rave lovers are in for a real treat with this New Years eve party, purchase your ticket now for £14!

Did someone say an all-singing all-dancing New Year’s party? Err looks like we’re gonna have to head to Notts for this one!

If you’re planning on going all out this year then head on over to The Blind Rabbit for two floors of fun with DJs playing all night long and a karaoke party hosted by the iconic drag queen, Kitty Tray.

Starting at 9pm, the event will take you through until the early hours of Sunday morning so you can get 2023 off to a flying start!

You actually don’t need to get tickets in advance for the Sing-Along NYE as it’s free entry.

However, if you do want to guarantee you can get in on the 31st, you can purchase a standard ticket which includes your first bevvie, or first two bevvies!

If you’re wanting to head to a buzzing cocktail bar with your mates for New Year’s then be sure to check out the Soirée New Year’s Eve Party.

You can groove the night away at The Wine Room City with live music from bands and DJs playing a mix of RnB, Hip Hop, Garage and Reggae Dancehall hits.

They’ll even be a 360 booth so you can soak up the party atmosphere and capture all of the mems of the last night of 2022!

This event is on final release so get booked in for a fantastic evening. 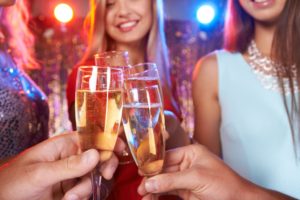 Lastly in our guide to the top NYE events in Nottingham is The “Free-flowing New Years Eve Extra Fun 80s Party.

Fancy heading to Percy Picklebackers for their New Year’s Eve celebration? Of course you do!

It’s set to be a night to remember with the biggest 80s hits taking you through to midnight and into New Years Day.

It’s also free flowing drinks from 9pm until 2am so you really can’t ask for anything more.

Get a drink in hand and celebrate New Year’s Eve in Nottingham the right way – dancing, singing and having a good time with your pals!

Wow, this guide has certainly got the excitement flowing for the top NYE events in Nottingham!

No matter where you’re celebrating New Year’s, even if it’s in your student accommodation, we hope you have an amazing time and wish you well for 2023!

Are you wondering how to switch up your skincare routine for the Winter? We’ve got just the guide for you with tips and tricks for the cold weather.

10 Best Things To Do For Students This Halloween 2022

The Food Guide: 10 Best Places To Eat In Nottingham